NAPSACC/Go NAPSACC is a direct education and PSE change intervention designed to enhance nutrition and physical activity practices in early care and education programs by improving the:

Go NAPSACC targets child care policy, practice and environmental influences on nutrition and physical activity behaviors in young children. The original NAPSACC program was designed for Child Care Health Consultants to use with the centers they serve and focused on best practices for promoting healthy eating and physical activity habits in children ages 3–5.  The online Go NAPSACC tools can be used directly by ECE programs, with varying amounts and types of support from technical assistance consultants, thus lending more flexibility to the model. The seven updated Go NAPSACC self-assessments and online tools cater to both centers and family child care homes and provide guidance for promoting healthy habits in children ages birth to five. Over the history of the program, the self-assessments and/or entire change process have been used by groups in at least 30 states and internationally. 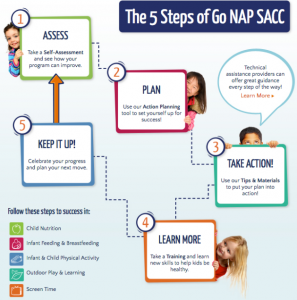 The 5 Steps of Go NAPSACC

1. Assess: Take a Self-Assessment and see how your program can improve.

2. Plan: Use our Action Planning tool to set yourself up for success!

3. Take Action: Use our Tips and Materials to put your plan into action!

5. Keep It Up: Celebrate your progress and plan your next move.

Technical assistance consultants can offer great guidance every step of the way.

The original NAPSACC materials, including a handbook for technical assistance professionals implementing the program, the original self-assessment instrument, action planning materials, and resources for staff and family education, are available for free download at http://centertrt.org/?p=intervention&id=1091&section=1. Updated self-assessments can be found at https://gonapsacc.org/resources/nap-sacc-materials.

Go NAPSACC is an updated, interactive version of the original program, including online self-assessments, interactive goal-setting and action planning support, and an online library of helpful documents and videos. Go NAPSACC is available to ECE programs in regions or states in which a state agency or other organization has contracted with the UNC Center for Health Promotion and Disease Prevention for access to the site. Along with site access for ECE programs, partnering agencies/organizations receive reports of self-assessment score and action planning goal data for ECE programs who participate under their contract. Please contact Go NAPSACC at gonapsacc@unc.edu for more information about pricing and features.

Annual membership price for contracts is $25,000.

Individual Item Scores in Nutrition and Physical Activity: Because the NAPSACC intervention allows some flexibility in the areas centers could target for change and because the observation instrument is scored using averages of sub-areas to obtain the Nutrition and Physical Activity scores, an additional assessment of an intervention effect was measured using all of the individual 75-items from the observation instrument. Nutrition effects were assessed with 51 items and physical activity with 24 items. The mean change in nutrition scores was a 4.3 point improvement in the intervention centers compared to -0.5 change in the controls; for physical activity, scores increased by 3.6 in the intervention centers compared to a -0.2 change in the controls. Both nutrition and physical activity improvements were statistically significant.

The impact of the original NAPSACC model has also been shown through studies by Drummond (2009) and Alkon (2014).

Between 2014 and 2015, a small randomized control trial was conducted to evaluate the impact of Go NAPSACC, specifically in the area of Child Nutrition. Over a period or four months, thirty-one center directors in rural North Carolina used the online tools with low-intensity support (average of 1 hour/month/provider) from trained local technical assistance consultants. Centers that participated in Go NAPSACC saw a 7.5% increase in their overall nutrition environment scores, which approached statistical significance when compared to control centers.

Based on the SNAP-Ed Evaluation Framework, the following outcome indicators can be used to evaluate intervention progress and success.

The self-assessment is completed a second time (after 6 months to a year) to see where improvements have or have not been made.  At this time Action Plans can be revised to include new goals and objectives and technical assistance can continue.

« Back to search results